Babar Azam now sits on top of the ODI batsman rankings of the ICC with 865 points and Virat Kholi is at the number 2 with 857 points.Babar Azam had scored a total of 228 runs in the ODI series against South Africa

Babar Azam is the fourth Pakistani batsman to receive the award Earlier, Zaheer Abbas, Javed Miandad, and Mohammad Yousuf were ranked number one in the ICC ODI rankings.Babar Azam is ranked third in the world T20 rankings and sixth in the Tests Opener Fakhr Zaman also joined the top 10 batsmen, finishing seventh 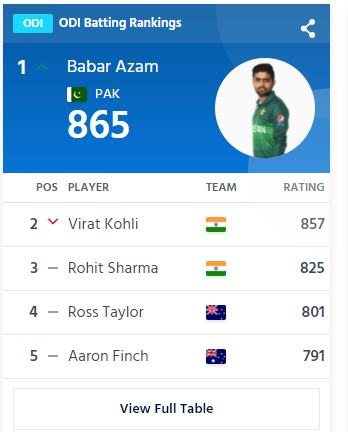